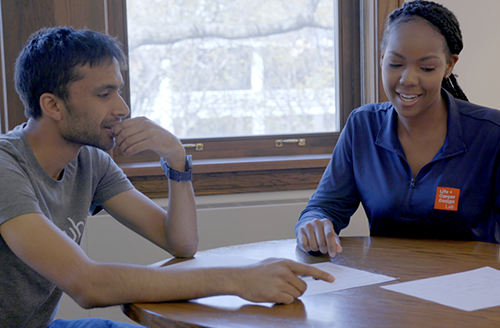 Career planning involves understanding yourself, your interests, and your goals given the opportunities available and potentially available to you. In Life + Career Design, we adopt the concept of wayfinding as a tool for understanding where we have been, imagining where we want to go, and identifying multiple paths we can take to get there.

Wayfinding is a particularly useful way to conceptualize career development because it assumes that either the goal is not completely clear or the path to that goal is not clear or certain, just like in career development. It allows for exploration of an environment and opportunities, attention to important cues or markers that are relevant along the path, and alternative pathways to a desired goal. Wayfinding encourages engagement/interaction with others, especially when one needs guidance or solutions to challenges that seem to be getting in the way of progress toward a goal.

To support our students’ wayfinding in their life and career development, we ask them to create wayfinding maps. This is a visual representation of where you have been (retrospective) or where you want to go (prospective).

A retrospective map has students note the activities or accomplishments in their life that they have found meaningful in recent years, then connect the related activities in ways they had intended and in ways they hadn’t, but that became clear upon reflection. Retrospective wayfinding helps one make sense of past decisions and engagements, how they were meaningful, and why.

A prospective wayfinding map has students reflecting on the opportunities available to them, identifying a goal, be it clear or not clear, and envisioning paths of engagement toward that goal.

A wayfinding map consists of:

Here’s an example of an LAS freshman’s wayfinding map that addresses whether the student wants to major in integrative biology or molecular and cellular biology. The map and activity required the student to reflect on how to gain clarity on an answer to this question. 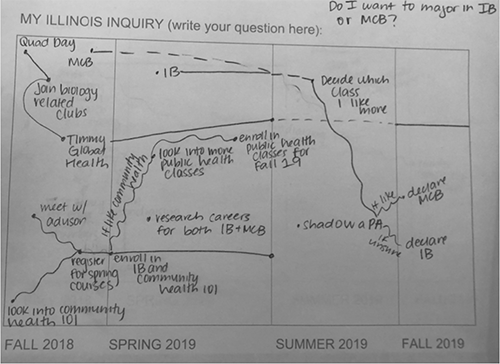 Do I want to major in integrative biology or molecular and cellular biology?

Rationale: I am curious about this question because going into college, I was really set on molecular and cellular biology. After some investigation into the two different majors, I am no longer so sure. In high school, I took AP biology and was always better at the molecular and cellular part of the class because I am really good at memorizing information. After realizing this, I thought that I should major in MCB because my test scores showed that MCB was my strong suit.

However, MCB in college is very different then MCB in high school. In college, my professor wants us to go beyond memorization and into application, and this is where I started to struggle. At first, when I started feeling unsure about MCB, I told myself I was just psyching myself out because it was a rigorous course. After really sitting down and thinking about it I realized I was never really passionate about MCB, I was just good at it. Once MCB became application-based, I lost interest.

Once I realized this, I scheduled a meeting with an integrative biology advisor, Tonya Pulley, to discuss my problem. She discussed some community health classes I could take spring semester to further see if integrative biology was right for me. She also suggested that I shadow a physician's assistant over winter break or summer break before ruling out MCB, because that is the career path I was planning on pursuing after earning a degree in molecular and cellular biology. I know that this inquiry does not need to be solved until sophomore year, but I think it is a good thing to start thinking about it now.

To learn more about creating your own wayfinding map, take one of our classes or visit the Life + Career Design Lab.