Skip to main content
From battlefields to bureaucracies, Jon Ebel studies the impact of faith

Since joining the Illinois faculty in 2005, Jon Ebel, professor and director of graduate studies in the Department of Religion, has studied the religious history of the United States. The author of two books (with two more in the works) brings to light the influence of religion in battlefields, weapons plants, bureaucracies, and other unexpected places to reveal how deeply history has been affected by faith.

What are you working on? I am currently pursuing two book-length projects. The first is a study of the place of religion in the Dust Bowl migration, focused on the interaction between migrants and New Deal officials in agricultural California. I love this project because it is giving me the opportunity to weave unheard voices into the story of religion in America. And by this I mean not just the dislocated, destitute migrants, but also the men and women working within the New Deal bureaucracies in California. It has also been a wonderful project (though somewhat daunting) because New Deal officials never saw a sheet of paper they didn’t want to keep. So the archives are enormous, but incredibly rich.

The second project continues my interest in the study of religion and war, focusing this time on the material culture of weaponry. The general idea is to tell the religious history of American warfare in five weapons: the blade, the rifle, the grenade, napalm, and the drone. I’m interested in the religious stories of those who designed, improved, used, and suffered from these weapons. I am also intrigued by what each weapon has symbolized, both to those who wage war and to those who describe it. This might seem like a strange project for someone who studies religion– weapons are secular technologies, right?—but there is a tremendous amount to be said about what these weapons reveal about America and its faiths.

What’s the impact of your work? I suppose the connecting thread between these two projects is that I want people to notice religion in places where they might not otherwise see it right away. We’re so trained to think of “religion” as occurring in neat little architecturally recognizable boxes. But lives and religion are so much more complicated than that. Researchers in my field have done a good job of moving out of mosques, temples, churches, and synagogues, into the lives that lay people live. I hope that my work will validate and continue this move and erode further the barrier that we erect between “religion”—the things we do in mosque, synagogue, church, temple on a particular day at a particular time—and our decisions about, say, the economy or military action.

I left the Navy and entered graduate school in 1997. In spite of ridiculous statements about ivory towers, we don’t stand apart from the world at all. In fact, we and our students feel its pressures as directly as anyone. My field has changed as the world has changed. We write and teach a lot more about violence and authoritarianism today than we did in 1997. We write more about empire and exploitation now than we did in 1997. We are more aware of our nation’s religious diversity today than we were in 1997.

The two decades since have seen an incredible boom in the study of religion and in U.S. religious history. The field was already growing at the end of the 90s, but the growth and influence of the Christian right in American politics and the emergence of Islamist militants as a global concern accelerated that trend. Whatever one thinks about these movements—I find both deeply problematic—they demonstrate almost daily that anyone who hopes to have something insightful to say about politics and culture, nationally and globally, ought to know something about religion.

Please describe your proudest or most significant achievement: I ran for Congress in the Democratic primary in 2018. I did this for many reasons, but what I wanted to remedy most was the lack of representation that the U of I community has in Congress. Our voices are not being heard. I am most proud of the level of local engagement that my campaign generated, and of the many ways we were able to get neighbors and friends involved in politics. I value academic work immensely, but I’m glad that we were able to convince people in the U of I community that we need leaders willing to engage in politics. 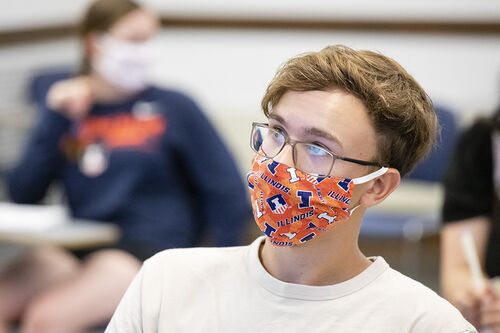 Read article:
Partnering against the pandemic
COVID-Corps seeks to grow outreach, connections, and learning during a challenging time
END_OF_DOCUMENT_TOKEN_TO_BE_REPLACED

Read article:
More than 40 new faculty members begin fall semester in the College of LAS
Specialties range from migration to cognitive science and the impact of hip-hop
END_OF_DOCUMENT_TOKEN_TO_BE_REPLACED