Three faculty members at the University of Illinois at Urbana-Champaign, including two in the College of LAS, have been named to the 2020 Clarivate Analytics Highly Cited Researchers list.

The list recognizes leading researchers in the sciences and social sciences from around the world. It is based on an analysis of journal article publication and citation data, an objective measure of a researcher’s influence, from 2009-2019.

Long is the Stanley O. Ikenberry Chair of Crop Sciences and Plant Biology. He uses computational and bioengineering approaches to improve photosynthetic efficiency and works to address the effects of climate change on crop yields. He was elected a Fellow of the Royal Society of London in 2013 and has been recognized as a highly cited researcher every year since 2005.  He directs Realizing Increased Photosynthetic Efficiency, a multinational project supported by the Bill & Melinda Gates Foundation, the Foundation for Food and Agricultural Research, and the U.K. Foreign Commonwealth and Development Office. He is an affiliate of the Carl R. Woese Institute for Genomic Biology at the U of I.

Ort is the Robert Emerson Professor of Plant Biology and Crop Sciences at Illinois. His research focuses on improving photosynthesis and addresses crop responses to global change factors including increases in atmospheric carbon dioxide and temperature. He leads the Genomic Ecology of Global Change theme in the IGB and was elected to the National Academy of Sciences in 2017.

Hoffmann is a Founder Professor in materials science and engineering and a member of the Materials Research Laboratory. His research focuses on topics related to magnetism, such as spin transport, magnetization dynamics and biomedical applications. His work on spin Hall effects has contributed to the development of spintronics, electronic devices that harness electron spin for faster and more efficient computing. Hoffmann is a Fellow of the American Vacuum Society, the American Physical Society and the Institute of Electrical and Electronics Engineers. 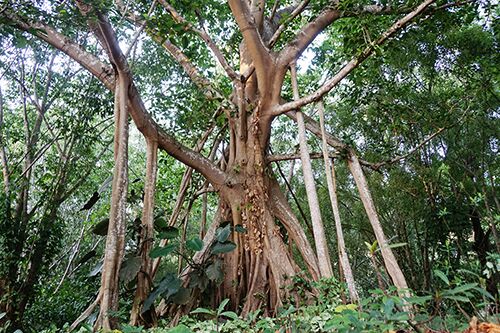 Read article:
Cracking the mystery of the banyan tree
Plant biologist sheds light on the fig tree's odd aerial roots and its unique relationship with a wasp
END_OF_DOCUMENT_TOKEN_TO_BE_REPLACED