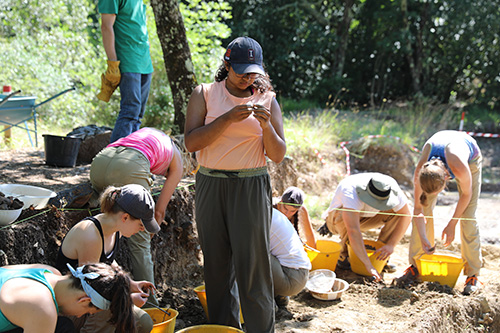 During the summer of 2018, I had the privilege of excavating in central inland Tuscany, Italy at the Poggio Civitate Archaeological Project. Before this time, I had little familiarity with classical archaeology as a discipline, or any type of archaeology, for that matter.

I studied Latin for most of my life and also found a passion for science and medicine. Having been a student of classics and a prospective physician, I was interested in classical archaeology and the ways in which the discipline could enhance my world view.

In learning the basics of archaeology as a first-year student, I was surprised to realize how multidisciplinary the excavation team was. The team included not only those who excavated and supervised on site, but also conservators, photographers, biologists, botanists, and illustration artists. I admired the value that all these people contributed to the accurate discovery, identification, and communication of the information obtained from Poggio Civitate. Moreover, I am now proud to call many of these people good friends of mine.

Poggio Civitate was the site of a once thriving community, which collapsed in a somewhat mysterious and abrupt manner in the 6th century BCE. The Etruscan site is well known for evidence of particular buildings which suggest its inhabitants were of an elite class. While the way in which the community was disbanded remains to be elucidated, one focus of current and future work at Poggio Civitate concerns how the commoners of the community lived and worked.

During my training, I learned much about the character and lifestyle of its inhabitants. For example, I was impressed by the skillful construction of many of Poggio Civitate’s buildings, some having been built with a decorative “lateral sima,” a gutter system to divert water runoff from the roof. The workshop structure on Poggio Civitate is where various types of manufacturing took place and may have been built in this way. This area is where I spent much of my time excavating.

By stepping into the shoes of an archaeologist, I gained a greater appreciation for both the physical labor and the intellectual curiosity required to be productive in the field. The first-year students rotated among four trenches at the site each week, allowing us the opportunity to learn about various areas of the site and work with people who have diverse experiences and perspectives.

At the site, I learned to discern stratigraphic layers, take measurements, and use my trowel for many excavation purposes. I also practiced how to differentiate among types of pottery, including terra cotta, slipware, and bucchero (which was unique to the Etruscan population).

Additionally, each of us spent approximately one day per week in the Magazzino, the conservation laboratory for the excavation. Here, I learned a great deal about how archaeological finds are conserved and catalogued once they arrive from the field. For instance, I practiced properly cleaning terra cotta, bronze, and slag in addition to learning different techniques for adhering broken pieces back together. As a life scientist, I enjoyed learning about the chemistry involved in many conservation techniques as well.

As a physician, I ultimately hope to be involved in interdisciplinary approaches to medicine. Medicine is a humanistic practice, and I believe that an understanding of the ways in which different people live and have lived in the past is necessary to practice medicine with compassion and empathy.

Not unlike archaeology, much of the practice of medicine involves analysis of the past. Whether in taking patient histories, analyzing genetic risk factors, or even in developing prognoses, physicians must be able to take the past into account and use it to make predictions about the future. During my time at Poggio Civitate, I experienced firsthand how archaeology and medicine are similar in this way. I am grateful to have enjoyed this memorable learning opportunity, which would not have been possible without the support of the University of Illinois Department of Classics.