One day in 1665, a tailor’s assistant in the English village of Eyam received a shipment of cloth from London and hung it out to dry. Unbeknownst to him, the bale of cloth was home to a colony of fleas infected with plague.

Soon, that man and one-third of the population of Eyam were dead. The means by which the village prevented the pestilence from becoming far worse, however, has become a lesson that resonates particularly today.

Eyam is a pretty little village of stone cottages in the Peak District of England’s Derbyshire Dales. Eyam has long attracted visitors in a kind of “dark tourism” focused on the villagers’ extraordinary sacrifices to contain the outbreak of disease. Helaine Silverman, a professor of anthropology, felt fortunate to be taken to Eyam in 2013 by a British colleague.

She was so struck by Eyam’s story that she immediately incorporated it into her Archaeology of Death course. She continues to include Eyam on her syllabus. She said that today, with the outbreak of COVID-19, the moral lessons of that old English community resonate strongly.

Although the residents of Eyam didn’t understand the plague, they knew that it was highly communicable. Eyam’s church rector, William Momppesom, took it upon himself to convince the panicked villagers to stay put in order to save the communities around them. Over 14 months the villagers of Eyam self-quarantined. Nobody entered and nobody left Eyam. By so doing countless lives were saved. But Eyam paid a terrible price.

“Day after day mothers, fathers, sons, and daughters died. Some families were totally lost,” Silverman said. “They buried their dead close to their houses rather than in consecrated ground, and their prayer services were held in the open where they could stand apart, rather than inside the otherwise crowded church. They persevered, assisted by the delivery of food to the edge of the village by charitable neighbors from beyond who appreciated the heroism of Eyam.”

In the face of COVID-19, historians and anthropologists point out that there is much to be learned from past disease outbreaks. Carol Symes, professor of history and founding executive editor of The Medieval Globe, pointed out that the word “quarantine” comes from “quarentena,” the medieval Venetian word referring to the 40-day period of isolation thought necessary to suppress a disease outbreak.

People today know much more about COVID-19 than those in the Middle Ages knew about plague, but Symes said history still repeats itself in many—some disturbing—ways.

“We are now finding that no amount of medical or epidemiological knowledge can surmount inaction and ignorance,” Symes said. “In fact, our society is turning out to be just as susceptible to false information and vicious rumor—now amplified by social media—as the people of the distant past.”

Symes noted that both the plague and COVID-19 have been directly linked to human degradation of the environment, accelerated global connectivity, and human encroachment on once-remote animal habitats. Both outbreaks emerged in China, with the plague carried by Mongol conquests of the 13th and 14th centuries. And the plague was linked to climate change, coming at the end of the Medieval Warm Period which led to cool and dry conditions that allowed Yersinia pestis, the microbe that causes the plague, to thrive.

She added that, similar to how citizens of China and people of Asian descent have faced demonization during the COVID-19 pandemic, Jewish communities were scapegoats for the Black Death in Europe.

“We find that this new pandemic starkly exposes our interdependence and basic biological equality,” Symes said. “Will it catalyze more sustainable environmental practices and economic policies that address the systemic problems of our national and global societies? Or will it further entrench socio-economic inequities, embolden authoritarian rulers, and open the way to further destruction of our shared global habitat?”

Emanuel Rota, professor of French and Italian, said that doctors in 18th-century France discovered that vaccination proved an effective method of reducing mortality rates for smallpox, but they didn’t fully understand why it worked. To the people trying to contain the disease, however, the lack of understanding was beside the point—and it was even criminal to debate the issue.

“The sense of cultural solidarity of the elites, generals, priests, doctors, aristocrats, etc., was enough to convince them to embrace the new method and to push it on the lower classes,” Rota said. “The lower classes had no choice but accept the new method, either as soldiers, or as Christians or as subjects, but they remained skeptical. They did not know what caused the illness but they trusted, or were forced to trust, the medical establishment.”

Most importantly, Rota added, the study of the inexplicable success of vaccination against smallpox led to the understanding that other terrible illnesses, like rabies, could be similarly prevented.

“The entire medical paradigm changed because researchers took that exception seriously,” Rota said, referring to the discovery and acceptance of vaccinations. “Today we are in a strange situation. We continue to rely on vaccines and we have nothing equivalent to antibiotics for viruses. Perhaps it is time to stop relying mostly on the solution we stumbled upon two centuries ago.”

Symes noted that the plague led to fundamental changes in attitude and ways of life in Europe. Some of it was due to the massive mortality from the disease; with reduced deforestation and reduced demands for grain, farmers were more able to diversify crops and improve the soil through the pasturing of livestock. An archaeological study in Glasgow revealed that people in 15th-century Scotland ate a healthier diet than today.

Also, Symes said, the devastation caused by the Black Death made clear the importance of the working class that kept societies functioning during the crisis. In wake of the plague, governments tried in vain to stop workers from seeking better wages and forming unions.

“As the peasants who marched on London in 1381—in response to unjust treatment and burdensome taxes—put it, ‘When Adam dug and Eve spun, who then was a gentleman?’” Symes said.

In Eyam, the plague spread quickly through the community. Within a few months, dozens of villagers had died and survivors were on the verge of fleeing. Momppesom, however, with the aid of a previous rector, Thomas Stanley, was able to convince them to stay. They are credited with saving countless lives.

“The moral lesson of Eyam,” Silverman said, “should give us hope that if a society decides to act decisively for the larger public good through selfless decency, cooperation, tolerance for inconvenience and—in our case—acceptance of scientific facts, then we will get past this infectious episode and hopefully emerge a better people, even a better nation.” 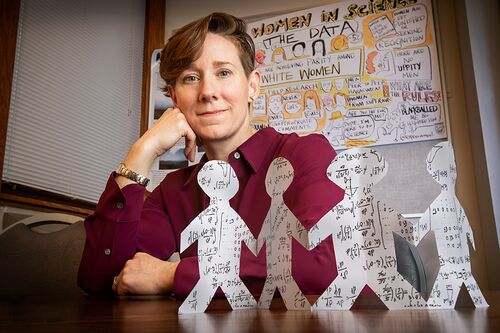 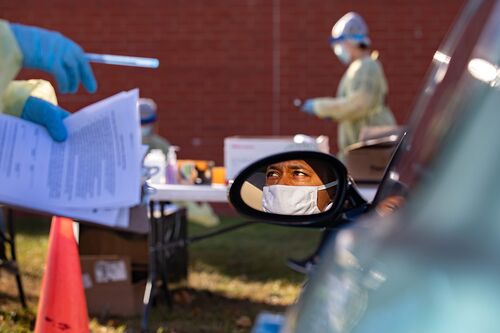 Read article:
Effort to curb COVID-19 leads to a deeper understanding of communities and the disease
Professors collaborate to help and learn from a town struck by the pandemic
END_OF_DOCUMENT_TOKEN_TO_BE_REPLACED