Political theory is seldom light reading. No one has ever curled up with a copy of “Das Kapital" to escape the cares of the day. So how do you get students to engage with the weighty ideas of past thinkers and apply them to the problems of today? That was the question for Jake Bowers, professor of political science. And he found the answer in an unexpected place.

“I was doing a lot of reading at the time, and I realized that many of the science fiction writers I read were acting like political theorists,” said Bowers. Only instead of dry tomes, they offered fascinating journeys into worlds where big ideas were made real by the characters who inhabited them.

“Ursula LeGuin’s 'The Dipossessed,' for example, uses characters and plots to make the idea of anarchy vivid in ways that a dry reading of a philosopher cannot,” Bowers said.

Bowers believed that science fiction could help answer that question while engaging students and preparing them to lead in a world of constant change.  And so, he boldly went where no one had gone before, creating a class that pairs science fiction and political readings. The result is Future Politics, a 300-level political science course that helps students practice a kind of theoretically informed futurism that explores the “what ifs of politics and society.”

In recent days, one of those books in the course has taken on new significance. Penned by Bruce Sterling in 1996, “Holy Fire” imagines a government that has become focused on life extension and stability after surviving a major pandemic. In the wake of disaster, a new world order is formed, with technology that allows citizens to live almost indefinitely as long as they take care of themselves.

This book challenges the political imaginations of readers by including both elements of Big Brother, like toilets that monitor your waste to ensure you’re getting enough water, as well as libertarian influences. It’s a world where drugs are free and everything is legal. But if you mistreat your body, there will be no help from the state.

“So, I assign that book, and then it spawns all these discussions about governance and the meaning of life,” Bowers said. “Is life more than just extending your time on the planet? What are the tradeoffs between surveillance and central planning versus allowing people to learn from their own errors? So, the students have this discussion about the now, but the book helps them think about possible futures.”

That’s one of the great things about science fiction, said Alex Shakar, professor of English. It allows us to game things out. “I think of a novel as a kind of laboratory in which we can simplify the parameters and cast out some ideas, exploring things like politics or ideologies,” Shakar said.

Sometimes that exploration takes place on different planets, and sometimes it unfolds on one very much like our own. Shakar’s latest novel, “Luminarium,” falls into the latter category. Set in New York City, it tells the story of a virtual reality company that’s transformed from an idealistic world for children to a virtual military training ground in the wake of 9/11.

“I was writing it at a time where I felt like society was going through something very similar,” explained Shakar, who said he’s always been drawn to a certain type of story. “The kinds of novels I’m most interested in are the ones that show you how the individual psyche and the big ideological, political, and economic systems that we’re in are connected.”

Recently, he’s become intrigued by the increasing political divide in our nation and how beliefs seem to be leading different segments of the population into different realties. In his current book, he’s exploring how fiction can play two very different roles in that scenario — as a weapon against reality and a tool for its defense.

It’s the type of book that could spark a lively discussion in Bowers’ class, which itself is laboratory where the parameters are constantly being adjusted. Movies like “Gattaca” have recently been added to lighten a course that can require reading 300 pages on a weekend. Future iterations could also include authors with local ties, such as English professor emeritus and Pulitzer Prize-winning author Richard Powers, whose “Galatea 2.2” novel about artificial intelligence gone awry was informed by his experience as an adjunct faculty member at the Beckman Institute.

Bowers isn’t the only one mixing the beakers and adjusting the height of the flame. “I try to let the students add things to the syllabus also, because I want them to own it and internalize these debates,” he said. In the process, he hopes they’ll develop more complex understandings of politics and emerge with a better developed “political imagination.”

Ultimately, however, Bowers wants to create a new generation of political leaders and social scientists who are every bit as imaginative in how to organize society, politics, and the economy as the Illinois engineers who recently made headlines for developing a low-cost ventilator in days for hospitals overwhelmed by pandemic.

“You hear about a lot of visionary tech people, but you don’t hear about visionary social scientists very often,” said Bowers. “I want our students — who are going to be leaders of their communities, the country and the world — to practice imagining. If you can do that, then you’re better prepared for what actually happens. And fiction helps them do that."

See more stories about politics at the Politics and LAS page. 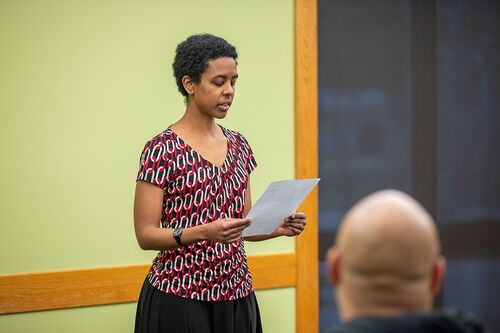 Read article:
Writing for discovery
The Odyssey Project teams up with an English professor to deliver the power of words
END_OF_DOCUMENT_TOKEN_TO_BE_REPLACED