A new book by Roderick Wilson, a history professor at the University of Illinois Urbana-Champaign, examines the relationships between the rivers and the people living along them, and the vital role that rivers played in Japan’s modern transformation. Wilson also considers the larger question of how people everywhere interact with and view their environments.

“Turbulent Streams: An Environmental History of Japan’s Rivers, 1600-1930” focuses on two of Japan’s most important rivers – the Yodo River and the Tone River – from the 17th century to the early 20th century and the interconnections between the rivers, nearby rural and urban communities, and governmental efforts to control them. That riparian history of Japan has been largely understated or ignored, Wilson said, and it is important for understanding the history of Japan as a whole.

In early modern Japan, rivers were a primary source of livelihood and remained under the control of local or regional authorities. Rice agriculture, fishing, boat transport, harvesting reeds and the use of floodwater-carried silt for farming all were important aspects of society. Adjacent wetlands also provided flood control and materials used by rural villagers.

After the shogun-led government ended in Japan in the late 19th century, the new centralizing and imperialist government sought to invest in new technology, promote commerce and industry, and achieve parity with the imperial powers of the West, Wilson said. Its plans included a national river infrastructure based on modern scientific ideas about how to manage and control these waters.

Wilson said the modernization of Japanese society did not impose a new river system across the country, but rather the building of a modern river regime was part of the process by which state and society changed in the 20th century. New engineering ideas and technologies; a political system that amplified the voice of wealthy rural landowners who were focused on flood control rather than on the past multiple uses and interactions with rivers; and the rivers themselves, through seasonal flooding, produced a new way of understanding and interacting with rivers.

The imperialist government’s river policy emphasized improved irrigation, stronger flood controls, and an increase in arable land and hydroelectric power – while ignoring fishing, river transport and other increasingly marginal uses of these waterways. Engineers abstracted the river and reduced the totality of riparian relations to those factors that were of measurable economic and political value, Wilson wrote.

“This kind of narrow understanding of rivers and the building of a national riparian infrastructure around it came at a well-documented cost to local communities, political institutions, and of course the rivers themselves,” he wrote. The cost included the loss of wetlands and wildlife, removal of sand and gravel that filtered pollutants, altered water temperatures, faster currents, reduced nutrients and fragmented habitats for fish and birds. The changes mostly benefited urban areas, not rural communities, and national interests were prioritized over local interests, Wilson said.

The river management system reengineered the rivers, channelizing them for efficient drainage and contained them behind ever-larger levees. Wilson said rivers today provide drinking water, support agriculture and industry, and generate hydroelectricity for Japan. But despite the resources expended to control them, flooding from typhoons still cause massive amounts of damage.

Levees were built based on historically high flood levels, and urban areas spread right up to the edge of these levees. But climate change has brought about more frequent and severe flood events, and by reducing rivers to drainage channels, they have less capacity to absorb excess water, Wilson said.

While the way local communities and governments interacted with its rivers was shifting, the way people thought about nature and their connection to it also was changing. The notion of rivers belonging to nature and humans to a separate society is a modern way of thinking that didn’t exist in Japan before the 1880s, Wilson said.

“The modern river regime and similar projects helped create these seemingly real and distinct entities (of state, society and nature). … In defining rivers strictly in terms of hydraulic processes and reengineering them to become efficient drainage channels, the Home Ministry and its engineers also contributed to the broader redefinition of these waters as natural objects (and) also reified an emerging boundary between nature and society,” Wilson wrote.

Before that, people did not see themselves as separate from what we call today the natural environment. The ways in which people in early modern Japan interacted with their country’s rivers through fishing, gathering, farming, irrigation and water transport formed dynamic environmental relations among all the entities – people, fish, boats and farmland, Wilson said.

“One of this book’s aims has been to show that rivers are not just a part of nature, out there in the Japanese countryside, but that rivers have long been and will continue to be an essential part of people’s daily lives,” Wilson wrote.

“Rivers of many sizes streamed past villages, towns and cities throughout preindustrial Japan. Today these rivers are often hidden from view beneath urban expressways or behind massive earthen and concrete levees, but Japan nonetheless continues to be a country of rivers.”

Read article:
Memories of Altgeld Hall
What is it about Altgeld Hall that endures so long in the imagination?
END_OF_DOCUMENT_TOKEN_TO_BE_REPLACED 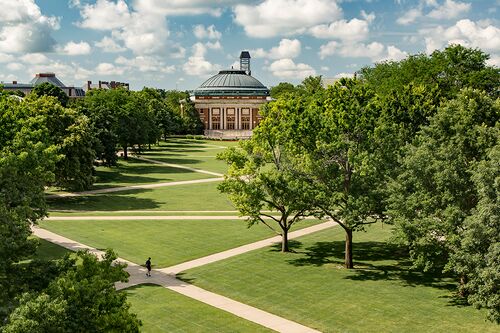