Skip to main content
Researchers: Eye size related to whether a bird can be tricked into raising another bird's young

Eye size likely plays a role in the contest between avian brood parasites – birds that lay their eggs in the nests of other species – and their hosts, who sometimes detect the foreign eggs and eject or abandon them, scientists report in the journal Biology Letters.

Brood parasites succeed by offloading the job of parenting to other species. The hosts’ own young suffer as a result of competition with the alien birds. If host birds fail to recognize eggs that are not their own, brood parasites can produce more offspring than would be possible if they simply raised their own.

Some bird species targeted by brood parasites can recognize a foreign egg. These birds will pierce or grasp the egg and eject it, abandon the parasitized nest or – in some cases – enshrine the parasite’s egg by building a new nest on top of the old one. This allows them to devote their parenting efforts solely to their own offspring.

The failure of some host birds to recognize foreign eggs in their own nests is somewhat perplexing, said Mark Hauber, a professor of evolution, ecology and behavior at the University of Illinois Urbana-Champaign, who co-led the new research with Ian Ausprey, a recent doctoral graduate at the University of Florida department of biology and the Florida Museum of Natural History.

“Birds have much better vision overall than we do as humans. They have four color receptors instead of our three. They also can see into the ultraviolet range,” Hauber said. “What we did not know before this study was whether their eyes are adapted to egg rejection.”

To study the relationship between eye size and brood parasitism, the researchers turned to data collected in the 1970s by Stanley Ritland, a student at the University of Chicago who measured the eyeballs of more than 4,000 species of birds in museum collections. Ausprey and his colleagues digitized Ritland’s data and explored the implications of eye size on a variety of traits. In a recently published study, for example, he found that birds with larger eyes were more likely to forage on insects or other prey that would require farsightedness, while those with smaller eyes tended to eat nectar or seeds that could be detected up close.

“Having larger eyes is similar to having a bigger camera lens,” Ausprey said. “By collecting more light, large eyes improve a bird’s visual acuity, its ability to resolve an image in dim conditions and at long distances.”

When analyzing eye size in different bird species in relation to their lifestyle as brood parasites, hosts, or non-host birds, Ausprey found that brood parasites had larger eyes than host birds – beyond the difference expected as a result of their larger body size – and that birds with larger eyes relative to their overall body mass were less likely to have their nests parasitized. Eye size in host birds also was positively associated with their likelihood of recognizing foreign eggs – unless the eggs looked a lot like the hosts’ own eggs, the researchers found.

“Non-host birds tend to have larger eyes than hosts,” Hauber said. “One interpretation of that is that the parasites go for birds with poorer eyesight.”

Hauber collaborated on a recent study that identified specific brain structures that play a role in interactions between a parasitic insect and its host. But the new research in birds is the first to show how a sensory system like the eyes contributes to the interplay between parasite and host, Hauber said.

These findings are a major step toward understanding how such interactions are evolving in birds, Ausprey said.

“Nest parasitism exerts enormous selective pressure on host populations, with major implications for population demography and local species persistence,” Ausprey said. “It’s incredible that such a simple trait as eye size can provide a powerful window into the sensory systems that mediate the coevolutionary arms race between nest parasites and their hosts.” 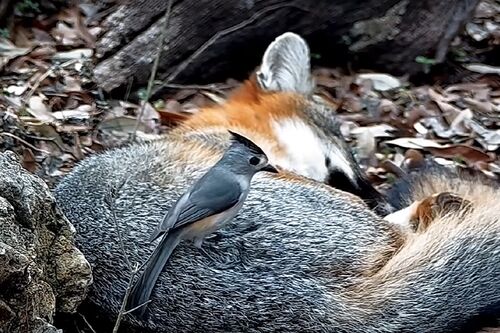 Read article:
Paper examines the bravery of fur thieves
From foxes to people to porcupines, nobody is safe from nest-building birds
END_OF_DOCUMENT_TOKEN_TO_BE_REPLACED