Two University of Illinois Urbana-Champaign researchers are developing resources for studying the Deseret Alphabet, which was created by the Mormons and used briefly in the 19th century.

Shosted’s research interest is phonetics, and Deseret is a phonetic alphabet, using symbols to spell words the way they sound. Growing up in Salt Lake City, Shosted remembers his grandmother’s unique pronunciations. She and other members of her generation pronounced the “or” sound as “ar” – so “cord” sounds like “card” and “fork” sounds like “fark.” He wondered if texts written in Deseret would offer evidence of that way of speaking in the mid-19th century.

The Deseret Alphabet grew out of the Mormon interest in spelling reform and shorthand that began when they were headquartered in Nauvoo in western Illinois in the 1840s, Shosted said. They wanted to be able to quickly write down the words of church leaders and make them available to the public. Education was a priority for the Mormons, and they also were interested in making English easier to read, he said.

After their arrival in Utah, they invented Deseret, which is heavily influenced by Pitman shorthand. But Mormon citizens rejected the use of the alphabet for education, and it was used for only a short period of time, mostly for official documents produced by the church, Shosted said.

While on sabbatical this semester, Shosted has been researching Mormon texts written in Deseret. He found a first edition Book of Mormon written in Deseret – one of only 500 produced using that alphabet, and one of only 200-300 still in existence – and the Rare Book and Manuscript Library at Illinois purchased the book.

RBML has a strong collection on the history of religion that includes a small but significant group of books related to the Church of Jesus Christ of Latter-day Saints and other closely related denominations, said Caroline Szylowicz, a curator of rare books and manuscripts. The collection includes a first edition of the Book of Mormon printed in 1830; several significant revisions and early translations into foreign languages, as well as related texts; the recently acquired 1869 Book of Mormon written in Deseret; and two 1868 Deseret primers for children.

Producing the Book of Mormon in Deseret “was a major undertaking, at great expense,” Shosted said. “The Latter-day Saints in Utah had a lot of financial burdens at the time, and they still chose to invest in this. They were sincerely engaged in the Deseret Alphabet project, but I am still trying to understand their motivation. I suspect it was their commitment to education and publishing the word of God that influenced them the most.”

In addition to how the alphabet can shed light on changes in language, Shosted is interested in its role in cultural preservation.

“Deseret Alphabet texts may be as close as we can get to an audio recording of how people spoke in Utah in the late 19th century. It’s a window into history because it reflects their pronunciation,” he said. “If the Mormons had kept using the alphabet, or used it more widely, it would have preserved some fascinating linguistic information about the emergence of a dialect and culture in Utah that arose from so many immigrants living together in one place.”

Other writings in Deseret that are available for research include publications of other Mormon scripture besides the Book of Mormon, minutes of meetings of church officials, diaries kept by Mormon missionaries who transcribed the Hopi language using Deseret, some entries in the Deseret News – a newspaper in Salt Lake City – and readers for children. In the University of Utah archives, Shosted found a photograph of a gravestone written in the alphabet.

Many documents written in Deseret are available online through digital scans, but they are not able to be transcribed or made searchable because there is no transcription system that recognizes Deseret characters. Shosted has been painstakingly making phonemic transcriptions of published texts. Davis is developing an optical recognition system that can automatically transcribe printed documents written in Deseret. The goal is to make available a corpus of text-searchable documents that can be used for research, Davis said.

Davis also is producing a new font to replace existing Deseret typefaces with heavy characters that are quite difficult to read.

“We’re laying the groundwork so we can get everything available in one place in a way that has not existed before,” he said.

The Deseret Alphabet has been added to Unicode, a standard developed to represent the writing systems of the world’s languages on computers. Its addition makes working with documents written in Deseret more feasible, Davis said, and it was used for the Deseret texts on the consortium’s website.

The alphabet’s inclusion in Unicode also has led to a renewed interest in the alphabet, with intellectuals and artists using the alphabet in online forums and to produce copies of popular memes, Davis said.

“It ended up driving a lot of adoption on the internet. A hobbyist community formed around it,” he said. “There is a group of people interested in understanding and preserving it as something of a living tradition.”

Shosted said the Illinois Deseret Consortium project, as well as the RBML purchase of the Book of Mormon written in Deseret, are important for Illinois.

“Utah dominates the popular imagination when it comes to who the Mormons are, but in many ways, Mormons are Illinois people. The Mormon story is an Illinois story, too,” he said. “Maybe we can help Illinoisans remember the major part that communities in this state played in Mormon history. As a small but interesting example, the seeds of the Deseret Alphabet were planted a fairly short distance from Champaign-Urbana, in Nauvoo.” 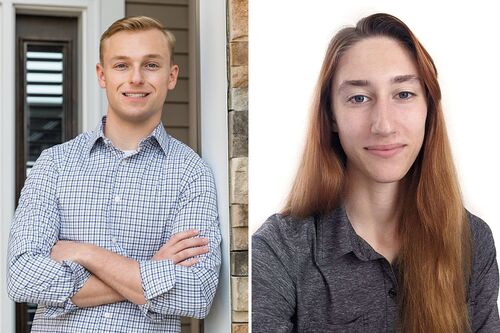