About 160 million Americans voted during the past election, which represents the highest overall number in history and the highest percentage of eligible voters since 1900. Included in that number was a strong turnout by Black voters, many of whom voted for Joe Biden and Kamala Harris and are credited for helping to lead the Democrats to a presumptive victory.

While the election saw a higher percentage of Black voters cast support for Donald Trump than they did in 2016, Black voter turnout was higher in 2020, with an estimated 87 percent of Black voters supporting the Biden ticket, according to The New York Times. This may come as no surprise—the Democratic Party has enjoyed strong Black support in the modern era—but there was a time in American history when Black voters largely supported the Republican Party instead.

What changed? What determines party affiliation? Ronald Bailey, head of the Department of African American Studies, said two things contribute to an determininge a voter’s political affiliation: their individual interests  and their collective or group interests as a community or nationality. He considers politics to be well-defined by influential political scientist Harold Lasswell, who famously declared in 1936 that politics and power is the process of determining “who gets what, when, how.” For his students, Bailey paraphrases that line to “Politics: Who gets how much of what there is to get,” and asks them to keep that in mind as they consider how politicians make decisions that affect their lives.

That helps to explain the affiliations of Black voters in the Emancipation period and rural period following slavery, Bailey said. Escaped slave and prominent activist Frederick Douglass once declared, “The Republican Party is the ship; all else is the sea.” This was because President Lincoln and the Republican Party signed and supported the Emancipation Proclamation and the 13th, 14th, and 15th amendments to the U.S. Constitution, thus ending slavery, promising due process and equal protection, and enacting the right to vote for Black Americans.

Meanwhile, during the late 19th century and early 20th centuries (1860s-1930s) the Democratic Party “gave no welcome to Black Americans,” according to a June 18, 2020, article in USA Today. While the Democratic Party of that time period embraced white supremacists, Republicans were vowing to protect voting rights.

That’s a far cry from what happened this past Nov. 3, when the large turnouts of Black voters in cities such as Detroit, Milwaukee, Philadelphia, and Atlanta tipped the scales in favor of Biden and Harris in several battleground states. The shift by Black voters from Republicans to Democrats, historians said, came as a result of several factors that took shape in the early 20th century. More Blacks moved north to traditionally Democratic communities, and Democrat-sponsored programs such as the New Deal, the Civil Rights Act of 1964, and the Voting Rights Act of 1965 led to stronger support for the Democratic Party from Black communities.

The peak of Black support for Democrats came in 2008, when an estimated 95 percent of Black voters cast their votes for Barack Obama. By 2016, however, support for the Democratic Party by Black voters waned, but it bounced back in 2020, Bailey said, for several reasons. Biden’s decision to select Harris as his running mate was important.

Bailey said that Harris was the “missing ingredient” for Black voters that was lacking during former Secretary of State Hillary Clinton’s campaign in 2016. The Biden/Harris campaign had “enthusiasm, turnout, and organization,” Bailey said, including support from groups such as the so-called Divine 9—historically Black sororities and fraternities that organized “stroll to the polls” voting drives. Harris is a member of the historically Black sorority Alpha Kappa Alpha.

Other important factors played a role in the 2020 elections, Bailey added. The tremendous negative impact of the COVID-19 pandemic on communities of color, along with the large demonstrations in response to the deaths of George Floyd, Breonna Taylor, and others, gave gravity to the political races. Organizers such as Stacey Abrams of Georgia and many others worked to register and turn out large numbers of new voters.

Bailey added that regardless of history, and regardless of the current norms, Black voters and their allies should pay attention and support politicians who strongly represent the interests of for Black communities and working people.

“My biggest worry is that we need to think critically about the politics and the facts of history embedded in the Black experience,” Bailey said. “In AFRO 100 [Intro to African American Studies], I like to encourage students to think about then, now, and next. What has happened in history, what is happening now, what do you think ought to happen in the future—and what will you do about it?”

Editor's note: For more stories about politics and politics-related issues, visit the Politics and LAS page. 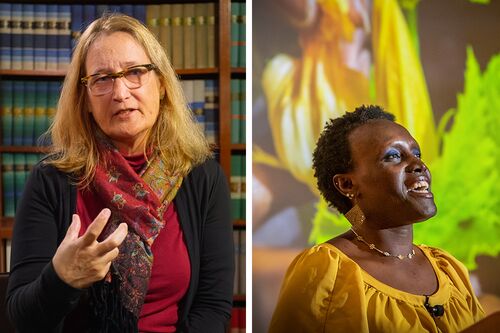