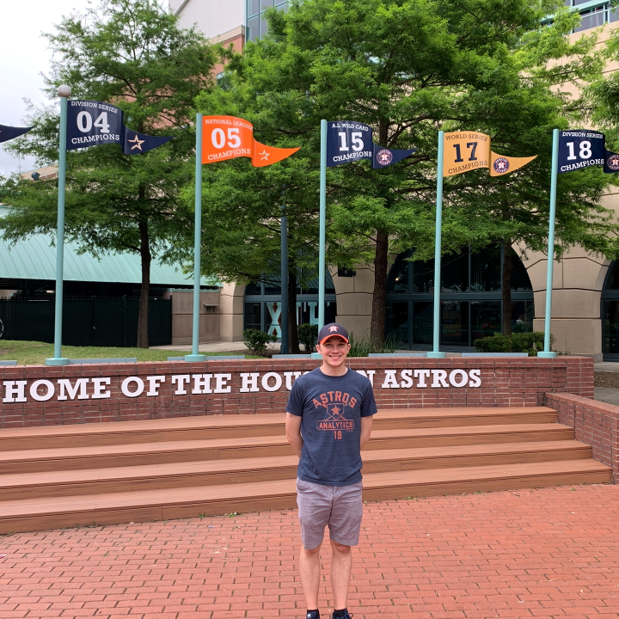 Charlie Young is a senior in the College of LAS, where he is majoring in CS + Astronomy and Statistics. Originally from Naperville, IL, Young has combined his love for analytics and baseball into work experience for Illinois baseball and several Major League Baseball teams. Earlier this year, Young completed an internship with the Houston Astros. Following his graduation in the spring, Young will begin working full-time for the Astros as a quantitative developer.

The College of LAS recently had a chance to ask Young about his time on campus and what it's been like to be a part of a historic season for the Astros.

Question: You’ve pursued a unique path of study, with coursework in computer science, astronomy, and statistics. What is it about these three subjects that interested you initially?

My initial interest in CS and coding came from an unusual place: my Ti-84 calculator. One day in eighth grade, my math teacher showed us how to make a simple looping program on our calculators, and I was instantly hooked. I remember spending days creating my own blackjack game and playing it whenever I had free time. That led to computer science classes in high school and my eventual application to the University of Illinois.

My introduction to astronomy was a little more complicated. In my junior year physics class, we had a unit on astrophysics followed directly by a unit on particle physics. Both topics were very interesting to me, so I decided to take a few weeks out of my summer to decide which one I would rather pursue. I enrolled in two summer courses at Brown University – one in exoplanetary science and one studying the discovery of the Higgs boson particle. At the end of the two weeks, it was clear that astrophysics was the topic I enjoyed more, and when applying to colleges, the Illinois' CS + Astronomy degree seemed to be the perfect fit.

I have always loved math and statistics, but my real passion for statistics started after the Cubs won the World Series in 2016. I knew analytics played a major role in the Cubs’ success, and their success led to baseball analytics becoming my hobby. I took a few introductory statistics courses, and before I knew it I had declared my statistics minor. After realizing I wanted baseball analytics to be my future, I upgraded my minor to a double major, and I have loved every statistics class I have taken at Illinois so far.

Q: How do you think your background in astronomy separates you from peers in the industry?

A: The astronomy part of my major has separated me from my peers in a few different ways. The physics and astrophysics courses I have taken have exposed me to challenging problems I would not have experienced anywhere else. Since astrophysics is at the forefront of modern science, not every question has an answer...yet. Understanding that a problem has multiple theories and diving into each one has helped build my critical thinking and creative problem-solving skills.

My physics background has been particularly helpful in the baseball analytics field. Being able to understand the kinematics behind the flight of the baseball has led me to take on cutting-edge projects, both for individual research and major league organizations.

Astronomy has also been a great conversation starter in interviews. I can’t remember how many times I’ve heard “tell me about astronomy” at the start of an interview. Pursuing a liberal arts discipline with an engineering degree definitely helps me stand out from other applicants.

Q: What’s it been like to work for the Astros during a franchise-best 107 win campaign?

A: Working with the Astros this summer was an incredible experience. Before beginning my internship, I had read numerous articles about the effectiveness of the Astros front office regarding player development and acquisition efforts, and that absolutely held true when I arrived in June. My coworkers are some of the nicest and smartest people I have ever met, and the city of Houston loves few things more than the Astros. I’m tremendously excited to get back to Houston and help contribute to a fantastic franchise.

Q: As you prepare to work full-time for the Astros after graduation, what advice would you give to seniors in high school that are considering Illinois and the College of LAS?

A: My liberal arts degree from Illinois played a major role in getting me where I am today. Combining the liberal arts background with an engineering degree has helped me stand out to interviewers and given me a diverse problem-solving background. Despite the large size of the college, every LAS advisor I have talked to has always put my future above all else. That one-on-one attention has been extremely helpful in planning my courses and future. I’m sure there are not many places that can match Illinois’ dedication to their students.

Q: I know faculty from astronomy, CS, and physics have been influential in your growth and development. Can you describe the support they’ve provided and the doors that they’ve helped open for you?

A: I can say that without the help of my mentor, Alan Nathan, I would not be where I am today. Since my freshman year he has provided guidance on my own research projects, generously allowed me to collaborate with him on his projects, and helped me reach out to major league analysts. Most importantly, he has taught me how to ask the right questions and how to conduct research the right way. Being able to work with a world-renowned baseball researcher for almost four years has been an absolute privilege and one that I will miss when I graduate and start my analytics career.