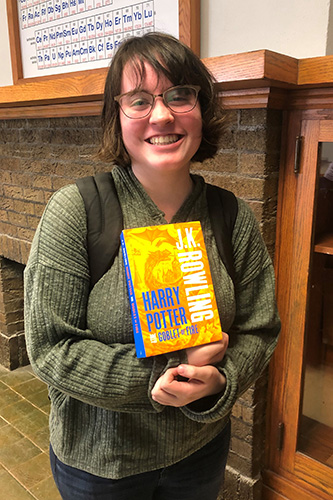 Ashlee Walters is a senior in English who also is pursuing a minor in medieval studies.

As a transfer student now in my junior year, I’ve taken almost all my gen-ed requirements, along with many classes specific to my major. However, since the university offers many classes that are both very interesting and fun, I knew I wanted to take more!

This semester, I’m in a few classes that I never thought I could take as a student: a class on Grimm’s fairy tales, a class about horror films (and yes, we watch a horror film every week!), and a class about Harry Potter! I am absolutely in love with the Harry Potter franchise—both books (I have two copies of each book, and even a tattoo from the seventh book) and films—so I was shocked to find out that the university offered a course about it.

GER 199/CWL 199, “Harry Potter & Western Culture,” is a very fascinating course. It is very discussion-focused, and is decently small, so we have the chance to learn about everyone’s perspective and different ways of seeing the novels.

One question that has stuck with me from the very first class was proposed by the instructor, Professor Johnson: What makes the novels so timeless? So many different series have been popular but tend to fade out as time goes on, but the Harry Potter series doesn’t seem to be one of them.

Some of the topics we have discussed have included how Harry’s upbringing at the Dursley’s could have helped or hurt him according to how he perceives the world around him, the possible motivations of Peter Pettigrew, and the roles of different authority figures. We have also looked at how the novels relate to our own lives and the culture we are in today.

I honestly never thought a university would offer such a class, but a class about Harry Potter is probably the most fun class I’ve taken, especially with my already large love for the series.

I’ve been able to take many classes through the College of LAS that interest me, not simply classes that I have to take for my major. I’m looking forward to next semester already because I know there will be more interesting classes that will be available. The classes offered by the college don't just help you finish your specific plan of study, they keep you interested.