Thomas Ballard is a junior studying Political Science and Economics at the University of Illinois. Originally from the suburbs of Chicago, Ballard aspires to work in government as a public defense attorney and to address social justice concerns related to the criminal justice system. During the summer of 2020, Ballard completed an internship with the White House with support from the Life + Career Design scholarship.

The College of LAS caught up with him to learn about his experience at the White House this summer. 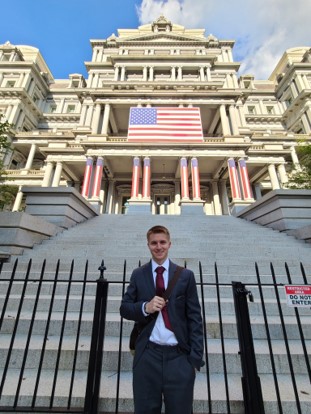 My experience interning at the White House this summer has been a large dose of professionalism, public service, and inspiration. I interned in the Office of Presidential Correspondence where my task was to read and coordinate a response to all the mail sent to the President of the United States. From constituent work to greeting requests to public policy issues, I was able to read and respond to the daily needs and thoughts of the American people.

What do you think you’ve gained from your experience at the White House?

Being able to work in the same space as some of the most accomplished people in American government, I gained not only inspiration and advice from their stories, but also access to a vast professional network of current and future leaders. I learned how to network, who to network with, and how it could lead to my next job. In total, I came out with a substantive network, a holistic understanding of correspondence management, and a greater sense of professionalism and standing out in the workplace.

What are your ultimate career aspirations?

While I am always open to the world carrying me to new places and occupations, I believe my purpose is to be a public servant. My career aspirations include going to law school, becoming a public defender, and helping to reform the criminal justice system. Should I feel fulfilled in that arena, I would love to serve the US federal government in one of our executive departments.

What is your favorite story or memory from this summer?

One of the most unforgettable moments was standing on the South Lawn of the White House near the South Portico, cheering for “The Walking Marine,” Terry Sharpe, a 69 year-old veteran who walked 300 miles from North Carolina to The White House during the hottest month of summer to raise awareness for veteran suicide. As he walked by with the Second Lady, I waved an American flag in my hand and thanked him for his service. Terry walking through the sea of American flags and supporters to meet the President on behalf of our veterans’ mental health could not have made me more proud to be an American too.