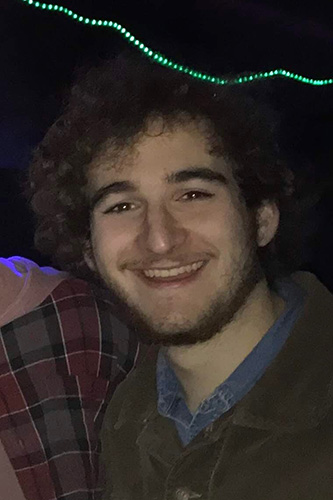 Matt Fanelli is currently studying history and media and cinema as a junior at Illinois, preparing for a career that involves writing.

He recently published research through the Humanities Research Institute (HRI) on campus. We caught up with him to learn more about his experience as an undergraduate researcher in the humanities.

Question: How did you initially get involved with research on campus?

I became involved in research with the help of my then professor, Roderick Wilson. My project was originally part of the normal curriculum for his environmental history class but, upon meeting with him several times to discuss my work, he recommended I apply for the Environmental Humanities Research Symposium put together by the HRI.

Q: Tell us a little bit about your research project.

My project focused on the impact of the Hiroshima and Nagasaki atomic bombings on the environmental consciousness of the survivors (or Hibakusha, as they later became known). Mostly from examining various writings of the survivors, I found a pattern of concern over the effects of man-made technology on the environment (both built and natural), all directly tied to their own experiences in Hiroshima or Nagasaki. This was expressed both with general concern as well as specific criticism, such as highlighting the component of manipulating nature in the Fukushima nuclear disaster.

Q: What drew you to this specific topic?

I was interested in this subject mostly because I wanted to see humanity’s reaction in the face of total environmental destruction. Going along with this idea, with Hiroshima and Nagasaki being the only examples of the use of nuclear weapons in war, this event is a unique moment in history that I felt was valuable to learn about. And, lastly, as an American, I felt somewhat obligated to learn of this tragedy committed by my country.

Q: What has been your favorite moment from your time completing this research?

Although it’s difficult to choose a particular moment, I feel it would be within my time looking at a book containing the reflections of various school children (from kindergarten all the way to university) who had been in Hiroshima at the time of the bombing. Seeing their writings focused on larger, almost philosophical concepts in the face of a very real, ultimately uncomplicated moment of destruction was incredibly inspiring. I suppose I had the assumption that such terrible experiences would kill one’s humanity, but I found the opposite to be the case.

Q: Any advice for other humanities majors looking to get involved in research?

I would say one of the most important things you can do (even beyond the goal of research) is to develop some kind of relationship with your professors beyond the required time in class. Going to a large school like U of I, it may seem that the professors are in some way out of reach. However, by simply going to someone’s office hours, you can see this is in no way true. In my case, my professor’s encouragement to submit this project was the reason I was able to become involved with this opportunity, and none of it would’ve happened if I didn’t welcome the chances to talk to my professor one-on-one.

Click here to view Matt's research, "The Hibakusha People: Environmental Consciousness from Atomic Bombs," as well as other undergraduate research in the humanities conducted through HRI.