One particularly telling moment at the ceremony highlighting the U of I’s being named one of the “Milestones in Microbiology” sites actually occurred after the proceedings were over, as those who participated in the event were having their picture taken around a plaque from the American Society for Microbiology.

On the plaque were the images of eight “giants” whose work at Illinois during the past nearly 150 years played a major role in bringing the department the status it enjoys today. Thomas Burrill, Carl Woese, Abigail Salyers, and Nobel laureate Salvador Luria were among them—and all of them were deceased except for Ralph Wolfe, 94, who was making a beeline for the exit.

“Ralph!” Someone called. “Come here for a picture!”

He stopped for a moment and surveyed the group. “The photo looks perfect already,” Wolfe said, and continued on his way. Typically shy of the spotlight, it was Wolfe’s way of saying he was just one of many who made the department what it is.

Indeed, a prevailing message at the ceremony was that this honor—which has been awarded to just 10 universities before Illinois—is the result of years of collaborative work by faculty, students, and administrators in the Department of Microbiology.

“This department has had an incredible generosity of spirit for its entire time,” said John Cronan, who has served as head of the Department of Microbiology for 18 years, in his comments at the event. “One of my main jobs has been to not screw it up. Having done this for 18 years you might think I’m a competent administrator, but that’s not true—I just have a great department. My colleagues are colleagues in the best sense of the word.”

The American Society for Microbiology, the largest and oldest life science society in the world, named Illinois one of the Milestones for its “rich history of major microbiological achievements,” it said in a release. It added that the university has been “home to many outstanding microbiologists who have made seminal discoveries that significantly increased biological understanding and advanced the field of microbiology.”

As of 2015, Illinois is home to six past presidents of the society.

Those past Illinois professors highlighted by the society at the Milestones event include Burrill (1839-1916), who founded the science of bacterial plant pathology; Salyers (1942-2013), who pioneered studies of Bacteroides, a major intestinal bacterium responsible for breaking down fibrous materials, and whose research enhanced our understanding of antibiotic resistance among gut bacteria.

Woese (1928-2012) was honored for discovering the archaea, also referred to as the third domain of life distinct from bacteria and eukarya; Sol Spiegelman (1914-1983) initiated the study of RNA and the mechanisms of viral replication; Luria (1912-1991) pioneered the study of bacterial virus-mediated transfer of DNA; Irwin “Gunny” Gunsalus (1912-2008) was recognized for his seminal studies in microbial biochemistry.

A crowd of more than 150 people attended the event and heard several speakers, including college and university administrators, Robert Switzer, professor emeritus of biochemistry, William Metcalf, G. William Arends Professor in Molecular and Cellular Biology and professor of microbiology, Gene Robinson, director of the Carl R. Woese Institute for Genomic Biology, and others.

“Our Department of Microbiology has a decades-long record of world-class research and education,” said Feng-Sheng Hu, associate dean for life and physical sciences at the College of Liberal Arts and Sciences and Ralph E. Grim Professor of Plant Biology and Geology. “We all know that Carl Woese rewrote biology textbooks with his discovery of a third domain of life. In addition to Carl, a number of other luminaries have made profound contributions to the field of microbiology while serving on our faculty.”

Stanley Maloy, past president of American Society for Microbiology and a former professor with the Department of Microbiology from 1984-2002, said that the 18 years he spent at Illinois changed his life.

Intercepted after the ceremony before he reached the exit, Wolfe added one other group to the list of those who should be recognized: students.

“Departments of science really ride on the backs of graduate students,” Wolfe said. “They do the work.”

He was asked what he was most proud of in his 60-plus years with the department, as a professor or professor emeritus.

“I think just seeing the department grow and maintain its stature over the years has been the most important thing,” Wolfe said. “Many departments go through cycles. They have a cycle of excellence and then they decay. So far, we’ve been able to maintain our excellence.” 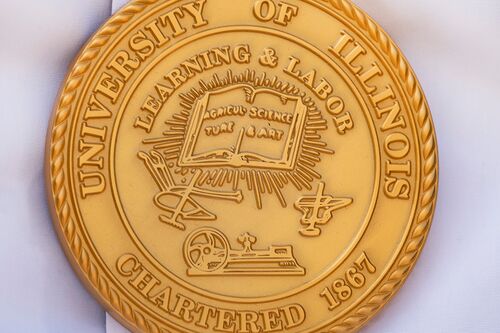 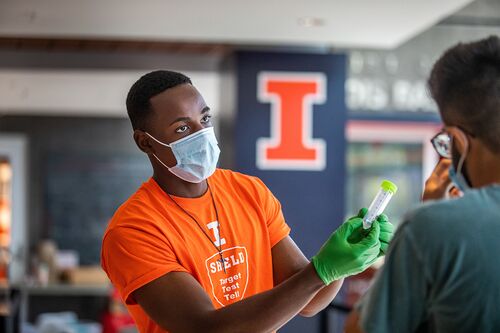 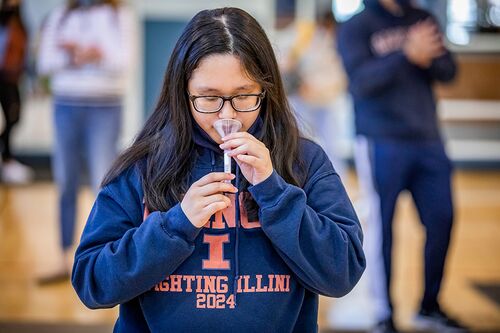