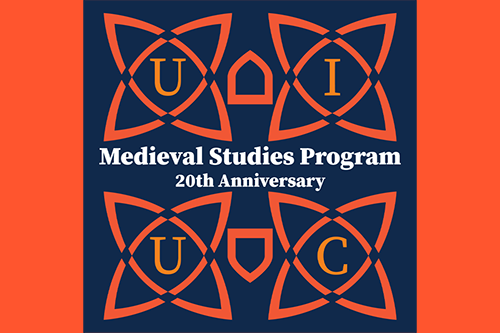 The Program in Medieval Studies at the University of Illinois is no stranger to hosting lively and interesting events. It recently celebrated a particularly significant one: its 20th anniversary.

The celebration, held in April, was the program’s first public in-person event since the onset of the COVID-19 pandemic. It was attended by students, alumni, faculty members, and other friends of the program. The celebration began with a research fair which featured posters and PowerPoints of current students’ research projects and highlighted the wide variety of scholarship that students are working on. The research fair was followed by a three-course meal and roundtable discussion.

It fit right in with other events that the program has hosted or helped host throughout the years. Among the first was “The Medieval Sources of Tolkien’s ‘Lord of the Rings’” (2001), a symposium featuring noted Tolkien scholar and medievalist Tom Shippey, which coincided with the release of the first of Peter Jackson’s three film adaptations. Others have included 24-hour readings of Dante’s “Inferno,” Medieval Movie Knights, and medieval dinner theater.

Where did this small but spirited and groundbreaking program come from? To be precise, although the program was formally established in 2001, medieval studies has been a field of research and instruction at the U of I since the late 1800s. At its core is a goal of giving students a wealth of historical and cultural insight through which to see the modern world. There’s something unifying about studying medieval life, proponents said.

Renée Trilling, director of the program, said that medieval studies draws together a variety of disciplines unlike any other. She’s a professor and researcher in English literature, but she majored in German in college.

“Medieval studies just gives students a kind of capacity to really engage with anything. Nothing is intimidating to a medievalist,” Trilling said.

“What we learn from studying 1,000 years of world culture is that many of today’s most pressing issues are the same issues that people faced then,” she added. “Challenges like learning how to live in a multiethnic or multireligious society, facing the upheavals of global migrations, or considering humanity’s impact on the environment were concerns for people throughout history. We can learn a great deal from seeing how people have responded to those issues in other times and places—much of which we definitely do NOT want to emulate, but some of which can remind us of people’s enduring capacity for empathy and communal responsibility.”

The medieval studies undergraduate major was established 10 years ago. Students who major in the program design their own course of study, drawing from fields such as literature, archaeology, philosophy, religion, the arts, and others. They have many options; faculty members come from multiple departments across campus and LAS.

Growing numbers of students are hearing the medieval call, even if they aren’t selecting medieval studies as their major. With many of the program’s courses fulfilling general education requirements, some of the most popular classes include Viking Mythology, which enrolls 150 to 200 students a semester, and seminar-style courses such as Introduction to Buddhism or The Middle Ages in Popular Culture, which are routinely filled to capacity and have a waiting list.

Previously, the program focused on Western European countries, such as Germany, France, Britain, Italy, Spain, and the Mediterranean world. In 2010, however, the program, led by then-director Charles Wright, began offering courses in the history of East Asia, West Africa, the Middle Eastern World, and the pre-modern civilizations of North and South America.

“We were ahead of the curve in the global turn, with one of the first conferences and first journals dedicated to global medieval studies, and with one of the first thorough-going global reconfigurations of a faculty and a curriculum,” Wright said. “Globalization is now entrenched and widespread in the field, and Illinois has played an important role in fostering that development.”

Students who study medieval studies go on to a variety of careers. Many pursue professor positions in fields such as history, literature, and anthropology, while others find careers in public humanities, such as an education coordinator in a public museum, or other careers you might not expect.

Alumnus Jamie Terrasi, who is now studying at Fordham University in New York, came to the University of Illinois specifically for its medieval studies program. He is pursuing a PhD in history. He appreciated the small class sizes in the program and ample opportunity for time with professors.

“I took classes in broad areas, expanded my own interests, and shaped them and formed them,” Terrasi said. “It was a great confluence of things; people who were dedicated and smart, and a subject that I really like.”

Medieval studies alumna Jill Fitzgerald has been teaching medieval literature at the United States Naval Academy for eight years as an associate professor in the Department of English. She regularly teaches courses on Chaucer, the medieval world, Old English, history of the English language, and viking myths and sagas.

What do future members of the U.S. Navy learn from Fitzgerald? She tries to make it vibrant and collaborative, just like it was for her at the U of I.

“To this end, I've made medieval iron gall ink with my students in a chemistry lab, overseen a research project on the oldest weapon at the Naval Academy—a 10th century Viking sword—and led groups of midshipmen on walking pilgrimages from London to Canterbury, just like the one described in Chaucer's ‘Canterbury Tales,’” Fitzgerald said.

Moreover, Fitzgerald’s students learn about issues concerning leadership, the intersection of daily life and military obligations, and how disputes and conflicts can be shaped by cultural and religious beliefs.

“The Middle Ages can help us think more carefully about these subjects in the past,” she said, “as well as in the present.”