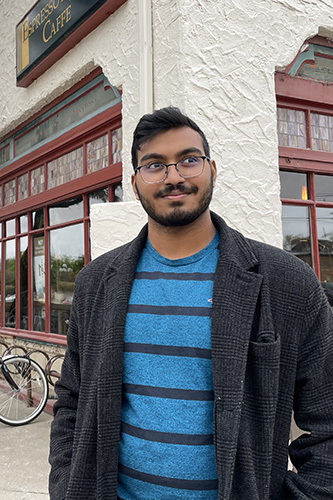 Bhaskar is a senior double majoring in philosophy and bioengineering.

I never planned on becoming a philosophy major. I came to UIUC with a plan to study bioengineering, learn about cutting edge technologies, and go on to help create new ones. I excelled at math and science, and so I wanted to let my skill in STEM carry me forward. However, I couldn’t shake my desire to find out whether any of the ‘big’ questions—usually glossed over in high school—had answers, so I used my extra time in freshman year to take some intro philosophy classes.

What I found was not quite the answers I was looking for, but a brand new way of thinking. In reading and studying philosophy, I realized that there is a philosophy in everything. How we direct our careers, how we create new things, how we interact with others—all of it relies on values that we don’t often think about. By being critical, we can see through our assumptions and craft better lives. I found myself continually wanting to learn more and take more classes, and that naturally led me to add a philosophy major.

While it may not seem directly impactful to my bioengineering degree, the act of doing philosophy orients one towards truth, and for me that has revealed a greater challenge in biotechnology than pure innovation. The regulations new technologies have to conform themselves to, and the choices made in implementation, limit the impact they can have. And even then, the gap of scientific knowledge between consumers and engineers means that people might reject treatment out of ignorance anyway. My hope is to use the skills gained through philosophy to tackle these issues, by pursuing a JD after graduation and entering the field of health policy and law.

For someone like me, things like philosophy or law will never be easier than solving a mathematical equation. The logic which works so smoothly in STEM contexts is instead pushed to the limits, and the lack of a clean answer can be unsettling. But at the same time, these are the problems that I personally find important, and rewarding to confront. One of the best things I’ve gained from my time at Illinois is realizing that and deciding to pursue it!